This schools heritage is a family system with a long history of development and refinement. Its training and teaching methods were seldom taught in a class or school situation, preferring to teach close family members using one on one instructional techniques to impart knowledge and skill.

From the original Black Crane System we learn grace and self-control. Combined with its exceptional balance and poise, the lightning fast hand sets and the graceful free flowing leg maneuvers make it a deadly combination for any opponent. 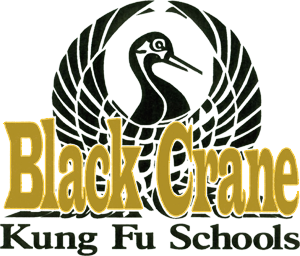 Today the Black Crane Kung Fu School still teach the family system that has been passed down, but it is now taught in a school and class environment. This schools Black Crane system is heavily based on Hsing I Chuan and follows the principles of San Ti the Trinity Postures (Heaven, Earth and Man). It is the very heart of training and develops many of the qualities essential to the development of the student’s martial arts ability. The Trinity Postures are also known as the Three Body Postures corresponding to the head, hands, and feet and these three phases are again divided into three sections. A great deal of emphasis is placed on the three phases of the body. These phases need to be coordinated in attack and then separated in defense. This allows the entire body’s energy to be simultaneously applied in an attacking movement while remaining centered and solid at the point of impact, and then in defence soft evasive power is applied to the defensive movement. All of the Hsing I Chuan postures and fighting techniques are developed from San Ti. The standing meditation training develops stamina, correct body posture and relaxation while allowing the body to remaining supple and sensitive.

The principles of Hsing I Chuan were born from battlefield experiences based on the movements of the spear and designed to be applied against a potentially armed or unarmed opponent. The straight line attacks of Hsing I Chuan utilizes a full range of body motion incorporating strikes from the “Seven Stars”; Hands, Feet, Elbows, Knees, Shoulders, Hips and Head. Using explosive speed with incapacitating techniques, powerful shocking strikes will damage and disorient an opponent, no matter where they connect, ending the encounter quickly. Hsing I Chuan is a powerful and overwhelming style of self defence tactically superior to most systems of combat given its succinct and efficient nature.

Although the Black Crane System is heavily based on Hsing I Chuan it still draws knowledge and skill from the two other internal styles of Chinese martial arts incorporating movements and techniques from Pa Kua and Tai Chi Chuan (Yang Style). Both of these systems blend effortlessly with Hsing I Chuan without encroaching on each styles individual attributes. What links these styles together is free flowing movement. The Hsing I Chuan System prefers linear movements and straight line attacks while the essence of Pa Kua is walking the circle. Turning and twisting using circular movements and swift changes give Pa Kua the ability to respond with quick, effective counter attacks deflecting opponent’s punches at the source while delivering forceful and telling strikes. Tai Chi Chuan with it’s seemingly effortless movements uses circular power in resolving, dissolving and neutralizing attacks Tai Chi Chuan’s defensive power guides rather than stops an opponent’s attack absorbing its opponent’s energy, then returning it back ten fold.

The Black Crane System is excellent for a person who wants to practice martial arts throughout their whole life and wishes to experience some of the long term health benefits of internal martial arts training. The internal arts believe in cultivating the strength of the internal organs and see them as a source of power and strength. By strengthening the internal organs and increasing the Chi and energy flowing within the body practitioners in this system increase in power with regular practice, staying fit and healthy even in old age. They are never too old to practice their art.