Customs of the School

The traditions and customs of this school are very old and by today’s standards many of the martial arts customs seem strange or bewildering to some people, but it is these customs that set us apart from the backyard schools and the new style of martial arts that seem to be appearing everywhere. The style this school teaches can be traced back through Chinese history well over a thousand years, and although not all of its customs have stood the test of time the ones that are still with us are to be adhered to.

When people talk about customs in a martial arts school the first thing that comes to mind is bowing. Bowing is the most misunderstood custom of all. Unlike the western world where a bow is likened to the lowering of oneself to a superior person, bowing in the oriental form is but a polite way of showing your respect and greetings at the same time. It is the equivalent of shaking hands when meeting somebody. Since the style we teach is Chinese in origin, we follow the Chinese customs of bowing within the school. There are two things in this school that must be shown respect, and in return receive a bow by all members, instructors and students alike. The first is the school itself for the training that you receive. The second is to the instructors, who are in turn, the direct representatives of the school. 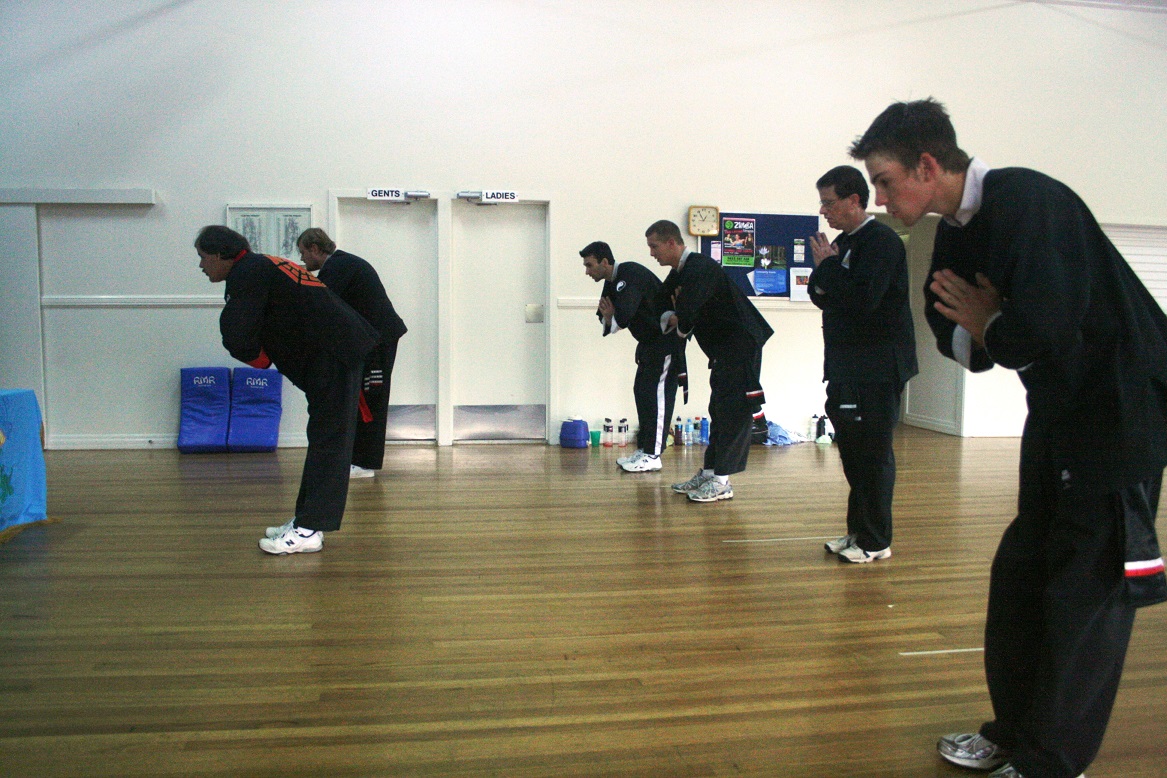 The Boxers Bow with the right fist shielded by the cupped left palm represents the sun and the crescent moon, symbolising the ultimate chi, the universe from which all power is created, and to which all power returns, the definitive balance of Yin / Yang.

The second bow that is used in the schools is the Monks Bow. This bow takes the form of a traditional Oriental prayer posture with both palms pressed together and held in front of the heart, with the head bowed. This sign of absolute humility is shared by many Asian cultures and is said to signify respect, for the light that shines within you.

The Monks Bow is used by the students and instructors to show their highest respect to the school. This bow is performed either when entering or leaving the school or a training class and during all traditional ceremonies. In this school, the prayer position with both palms pressed together represents a mountain, a mountain that resides within each of us, waiting to be climbed.

When entering or leaving the kwoon.
Before and after a training class or a grading.
When late for a class or when leaving a class early.
When being used by an instructor to demonstrate a technique in front of the class.
Before speaking to an instructor.

Traditionally shoes are worn in most Chinese styles and this school is no exception.
Shoes must be worn whilst training unless otherwise directed by the kwoon instructor.
Students are not permitted to wear RED or BLACK tops while training as these colours represent instructor grades and higher.
Students should never remove their sashes during a training class, as it is taken as a formal challenge to the instructor teaching you.
Traditionally, a Sifu wears his embroidered rank crests on his sleeves and on the back of his uniform. Instructors and students alike should refrain from wearing clothing like happy coats or T shirts with embroidered dragons to the training class or to school functions. Although this type of dress has no meaning outside the school, within the school it does.
Instructors and senior students alike should always be called by their proper titles (grades), as a mark of respect for the position they have achieved within the school.
Students should never walk between an instructor and his class or cut through a training class in progress: always walk around.
Never bow with anything in your hands, especially weapons, always put what you are carrying down first, before you bow.
Students are not permitted to carry swords, or bring them to training classes. The right to carry swords is reserved solely for instructors. Only instructors of a senior grade are permitted to bow in and out of training classes while carrying swords.
Never train in public places where people can see you or show people outside the school what you can do.
Never teach anyone what you have learnt. What may appear correct to you may be dangerously incorrect. Only qualified instructors are authorised to teach. Leave teaching to those people who have been trained to do so.